Strange Confessions: If I was one of those environmentalists who felt very strongly about their convictions, I’d be the kind that would want the whole human race eliminated. Like all gone. By disease or forced voluntary death/evacuation. However you do it, it is going to be a difficult task and you couldn’t be entirely sure everyone was gone.

So enters my review on Noah. I didn’t generally feel it was that bad… Perhaps it is good I rebooted my that one site account, for there were posts and opinions about it where I might get the snarly-lip thrown at me. I knew enough about the film that I just realized it was Darren Aronofsky’s fevered dream about how horrible the human race is and that the environment above all is what should be preserved. There is some truth in it too. I read once that within all stories is a story that reflects the gospel, and you don’t have to look that hard to see it here in Noah.

The beginning reveals, in a very well done/classic stop motion way, creation and the first murder, and angels showing empathy toward humans and the Creator cursing them. The earth is a barren wasteland with very little growth and people roaming around committing violence and looking for meat to consume. Noah and his father wander in isolated areas away from what they call “humans.” When they are gathering, or whatever they are doing, and they hear other men coming, they say with disdain and fear, “Humans! Hide.” Noah later does this with his sons. I did not comprehend what they thought of themselves, perhaps they thought that as a group or collective, influenced by each other in violent means, that these were “humans.” As a boy Noah witnesses his father being killed by other men.

So, to the main story at hand. Noah has visions of floods, him at the bottom of this flood and bodies all beneath him. In reality, incidentally it is hard to tell the difference between what Noah is really seeing or is having a vision of, Noah sees a harsh, violent, irredeemable mass of people eventually covering the earth. Noah takes his sons to see Methuselah to find out about his visions. On the way there they rescue a girl from death among the dead, and are chased by humans bent on violence. They seek refuge in the land of the Watchers, the fallen/cursed angels who helped the humans. The Watchers are mostly suspicious and fear humans. They are giant rock creatures made using stop motion animation. I really like the way these looked. Of course there is obvious disdain for these creatures by the Christian community, because it is really a stretch for Aronofsky as the Nephilim mentioned in the Bible. When they see Methuselah, he gives them a seed that will help him in his endeavor to save the animals from the cruel humans by building an ark. 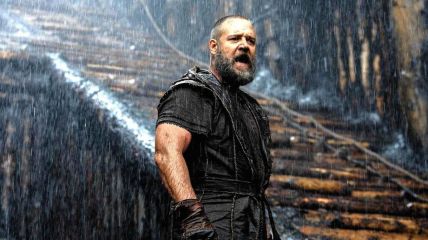 Other stuff happens, but let’s get to the point. Noah is planning on preserving his line on the ark until he goes to find Ham a wife among the humans. This is where Noah truly sees humans. As he wanders this camp that is planning on taking the ark when the flood comes, we are disturbed by the stealing of human children by bandits to exchange them for meat that the crowd tears apart and shreds with their teeth. The crowds are getting out of hand and meat is thrown to calm them, but it only throws them more into a frenzy. They are bloodthirsty fiends that Noah has never seen this close. As he looks around from a high vantage point of all the chaos surrounding him, he sees his father tearing at an animal, thus seeing himself and if his line is preserved he and his family will carry on the bloodthirsty rages that defines the humans he sees. I can see his point of view and it is a biblical view, whether or not it was Noah’s. Noah begins to become violent and fearful to his family as he tells them about how his line, the whole of people will end with the death of Japheth. There is another remarkable scene that uses stop motion, where Noah tells his family the story of creation and how animals were first and it was only when humans came about that things truly fell apart, which for the most part is true.

I use to go to parties or dances or clubs where there were lots of people and the music was loud and people were stupid. For a time it was fun, but eventually I got claustrophobic and had to get out. It always ended that way. I’d get out depressed and feel as if the whole world was dark and disturbed for giving in so much to themselves; and this was before I became a Christian. I hear people talk about how we evolve and we are getting better, but I didn’t ever see it. I see the whole environmental movement as a failure. We’ll never get it right, because no matter what we do to make things better, I believe for the most part it will only get worse. Yes, I have a pessimistic view on the human race, which is why I believe our only hope is Him, is Christ and His coming back and making all things new. Every effort we make for ourselves will fall. Things might seem better for a time, but we will only find better ways to bring about earlier destruction. Dark, I know, but that is how I see it, but it is one of the reasons I was drawn to Him. Which is totally why I could sympathize with the way Aronofsky portrays Noah in this.

I haven’t seen any Aronofsky since his very first film, Pi, but I have followed his career. Most of the stuff I haven’t watched for personal reasons, but I must say I admired his stance much more than that ridiculous made for TV version starring Jon Voight several years ago. The Jon Voight rewrote the story to garner more action and “story,” it considered the audience dumb. Aronofsky does not consider his viewers dumb, but in seeing much of the criticism for this film, I would not be surprised that his perception of Christians was brought low in his creative story telling. I admire him for that. And I liked his film.